Guide to live in Malaga

Quality of life, an enviable climate, a great historical legacy and an unstoppable projection are just some of the reasons why living in Malaga has become one of the best options.

Malaga is one of the eight provinces in the Andalusian region of Spain along the Mediterranean Sea. The other provinces are Huelva, Sevilla, Cadiz, Malaga, Cordoba, Jaen, Granada and Almeria. The world famous beach resorts like Marbella, Torremolinos, Mijas, Fuengirola, Benalmadena and many more are found in Malaga, also known as the Costa del Sol.

The Phoenicians built the town of Malaka, near the hill where the Alcazaba castle stands in 850 BC, making Malaga one of the oldest cities in Europe. When the Romans took over town, they built a port from where they exported wine, oil and garum, a sauce made with salted and fermented fish.

Under Muslim rule in the Middle Ages, Malaga experienced the greatest progress and became one of the most important cities in Andalusia.  The Alcazaba castle and Gibralfaro fortress were among the grand structures built at this time.

In 1487, Malaga is conquered by the Catholic Monarchs Isabela I of Castile and Ferdinand II of Aragon.    The mosques were transformed into churches, numerous convents were created.  In 1528, work on the Malaga Cathedral began on the site of a mosque.

In the 19th century, Malaga experienced an economic boom brought about by the creation of the iron, steel and textile industries.  Malaga is one of the foremost Spanish Mediterranean ports after Barcelona. Its main exports are iron ore, dried fruit, almonds, olive oil, oranges, lemons, olives, wine and canned anchovies.

Today, tourism is the focus of Malaga’s economy with more than ten million people visiting the city every year. 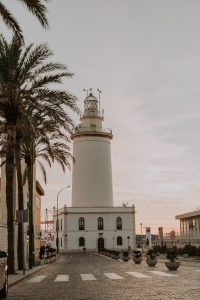 The Basilica Cathedral of the Incarnation or the Malaga Cathedral is one of the most valuable monuments of the Renaissance period both in Andalusia and Spain. It was built over a period about 254 years, from 1528 to 1782 on the site of a mosque by orders of the Catholic Monarchs.   The architecture of the Malaga Cathedral begins with the Gothic and ends with the Renaissance.  The main portal is Baroque and has two towers except that only one was finished.

At the foot of Mount Gibralfaro stands the fortress of Alcazaba built by the Hammudid dynasty in the 11th century when Malaga was under Muslim rule.  The Alcazaba is connected to the Gibralfaro Castle by a walled corridor.

The Gibralfaro Castle is another Muslim monument built on top of Mount Gibralfaro and overlooks the city and port of Malaga. It is connected to the Alcazaba  fortress by a walled corridor that descends to the fort below.

The Roman theater is part of the Alcazaba complex but was discovered only in 1951 and in 2005, the structures on them were demolished. Today, the theater has been restored to accommodate performances.

One of the greatest and most influential artists of the 20th century is Pablo Picasso. He was born on October 25, 1881 in Malaga. The Picasso Museum Malaga was opened in 2003 in the Buenavista Palace and house 285 works of the artist donated by his family. His birthplace is located next to the Plaza de la Merced.

The obelisk in the center of the Plaza de la Merced was erected in 1842 to commemorate the death of General Jose Maria Torrijos and 48 of his companions who were executed for fighting against the tyranny of King Ferdinand VII.

Holy Week in Malaga is one of the most important festivals of the Costa del Sol. More than six brotherhoods hold processions in the streets of Malaga throughout this Lenten season.  The origin of Holy Week in Malaga dates back to the conquest of Malaga by the Catholic Monarchs from centuries of Muslim rule when they set out to reintroduce Christianity to it citizens. Over the years, it has evolved from a religious tradition to a cultural event. 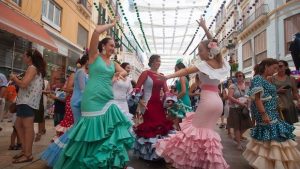 The Malaga Fair is the most popular festival in Malaga. Usually held in the last two weeks of August, the fair commemorates the city’s liberation from the Moors by the Catholic Monarchs and has been celebrated since 1491. There is music, dancing especially the flamenco and traditional Malaga dance, fireworks, a daily parade of horses and carriages on which women in flamboyant flamenco dresses sit and wave at the crowd, and bullfights.

The Malaga Carnival has been celebrated since 1981 and takes place every January or February at the Alameda Theater and the Cervantes Theater.  Groups like the murga, a popular musical theater and comparsa or dance troupes perform songs that criticize the social situation of the moment for ten days.

The Verdiales Festival is held every December 28, in the Malaga neighborhood of Puerto de la Torre where Pandas (Groups) de Verdiales come from all over Malaga to recover and disseminate the traditional songs and dances of Malaga, a cultural heritage that Malaguenos consider very important.

The cuisine of Malaga is largely based on freshly caught seafood and fresh produce from the farms in the area.

Malaga is a coastal city and fish forms a large part of its gastronomic culture.  A particular favorite is the espeto de Malaga, a skewer of slightly salted sardines grilled over a charcoal fire on the beach.

The Malaga salad is made of boiled potatoes, cod, oranges and olives.

The Porra Antequerra is a soup from the province of Antequera made with oil, vinegar, tomatoes, green peppers, garlic bread and salt.  It is usually served with boiled eggs and Serrano ham.

Ajoblanco is a cold soup from the Axarquia region of Malaga that is made of ground almonds, bread, garlic, and oil and served with muscatel grapes.  It is usuall served in September when both the grapes and almonds are harvested.

The best dish one can order at a Malaga beach is the fritura Malaguena a potpourri of fried fish – sardines, red mullet, cuttlefish, anchovies, baby squid, jurelitos, pink prawns and many others.  But the best of these, is the fried anchovies.

A traditional dish often served in winter is migas, a concoction of stale bread, olive oil, garlic and whatever meat and vegetables are available usually chorizo, peppers and potatoes and topped with a fried egg.

The Beaches of Malaga

Do you want more information?

Our team will be happy to answer any questions you may have.

We welcome you to Orience!

Schedule your video consulting with one of our experts

Cookies are important for you, they influence on your browsing experience, they help us to protect your privacy and allow us to proceed with your requests that you demand through the website. We use our own and third- party cookies to analyze our services and provide you with advertising related to your preferences on the basis of a profile made with your browsing habits (for example, visited pages). If you consent to its installation, click on "Accept Cookies", or you can also set your preferences by pressing settings.

This website uses cookies so that we can provide you with the best user experience possible. Cookie information is stored in your browser and performs functions such as recognising you when you return to our website and helping our team to understand which sections of the website you find most interesting and useful.

Strictly Necessary Cookie should be enabled at all times so that we can save your preferences for cookie settings.

If you disable this cookie, we will not be able to save your preferences. This means that every time you visit this website you will need to enable or disable cookies again.